Children with asthma stand at constant risk from triggers that can set off wheezing attacks, and even life-threatening shortness of breath.

The general relationship between allergies and asthma is fairly well known. Sources, such as the Mayo Clinic, have documented that the same substances that trigger allergies can also cause asthma attacks. The condition when diagnosed together is called allergic asthma, or allergy-induced asthma. In conditions where allergies and asthma are related, and the triggers of one may lead to the other, it is important to have strategies for both conditions available in the home. Asthma control devices are key for people whose asthma is a known condition. Nebulizers are considered the front line management technique for treating asthma.

It is also important to manage the risk of allergies triggering asthma attacks. Air purifiers in the home can help cancel out airborne allergens and the impact of traffic fumes in the home environment. The recent anxieties caused by densely polluted air in both China and Alaska caused a spike in the sale of air purifiers to reduce risk of asthma and allergies.

Bad air is now known to cause asthma

Similarly, there are conditions such as smoggy air that can cause both allergy and asthma. But now it has been determined that heavy smog and even the simple fumes from traffic congestion can actually cause the onset of asthma.

The discovery by a group of researchers in Europe that asthma can be directly caused by fumes from traffic congestion may come as no surprise to citizens in heavy traffic areas such as Southern California, where traffic backups dump pollutant laden air on nearby residents. The gases and particulate matter kicked up by car fumes contribute to the onset of asthma in children whose bodies are susceptible to the persistent presence of bad air. 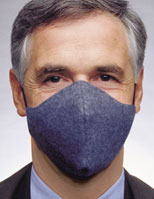 In areas where traffic fumes pose risks for children and adults, air pollution masks may be the best answer to reduce asthma triggers or developments of the disease.

A recent study published in the European Respiratory Journal has shown that car fumes can actually produce asthma in an estimated 14% of the population. It turns out that air pollution may be far more than just an asthma trigger. It’s can be the actual cause of the disease.
Posted by Allergy Asthma Technology at 10:13 AM